On "female" being an optional extra

Yesterday, a co-worker asked me to take a look at his website selling racing bikes, and offer him constructive criticism. However, what jumped out at me most was nothing to do with website design, but was rather to do with product labelling. He sells "bikes", and "female bikes".

Here's the thing. Despite the horrid pinkness of all his women's products, I'm glad that he sells bikes designed for women. There are average anatomical differences that mean that a bike designed for women will be a more comfortable ride for most (but not all) women than a bike designed for men. My issue is that the bikes designed for men are not "men's bikes" (or "male bikes", to use terminology consistent with his website), but "bikes". Being male is seen as the default, being female is to be different, to have special needs that require extra work to cater to.

This is a common attitude in our society, closely tied to the fact that being male, is to be seen as superior. If you disagree with that statement, consider this. While it would be acceptable for a woman to choose a man's bike, if it suited her needs better, a man choosing a woman's bike would, at best, raise eyebrows. A woman choosing a male product is perhaps upgrading, perhaps merely expressing a different presence. A man choosing a product designed for women is downgrading, making his masculinity questionable. This double standard is not ok.

To go to another example of how this attitude is prevalent in our society, many events offer only "unisex" t-shirts. "Unisex" clothing is designed to fit a male body, but women are considered fussy if they want a women's cut. Here's the thing though, the fit of a unisex t-shirt fits the average woman no better than a women's t-shirt would fit the average man. "Unisex" does not actually mean "unisex", it means "we could only be bothered designing one style, so we designed for men, because no ["real"] guy would be caught dead wearing women's clothing, but you can wear men's clothing, so deal with it". This was something that had long annoyed me, but really crystallized when I read a fantastic post written by Greta Christina, which managed to collect all the jumbled half-thoughts I already had on the issue, and put them together far more eloquently and forcefully than I could have.

Yes, these issues are rather trivial, but they are symptomatic of a society that is not as gender neutral as we would like to believe. What this post boils down to is this. Be aware. If you see a product, and then an equivalent product designed for women, chances are, the "standard" product was actually designed for men. If a product is a-gendered, consider whether it really is a-gendered (many are), or if it's a product designed for men, and women are simply expected to make the best of the situation (frequently the case). Do not mock or laugh off women who are dis-satisfied with having to make the best of products designed for men. Finally, if you design or sell such products, consider if you can improve the way you design and market your products, so that you do not re-enforce the idea that the male gender is the default, and so you better meet the needs of your whole market, and not just the stereotypically male share.
By Lucy Valenta Posted at 10:15 AM 0 comments

The historical meaning of marriage

On that note, here is a post by Victoria Adams, who, as an anthropologist and Christian, breaks down some of the history of marriage, both in the Western/Christian tradition, and in other world cultures, to show how the "traditional/biblical meaning of marriage" argument simply doesn't hold water. Read it.
By Lucy Valenta Posted at 9:26 PM 0 comments

Sorry for not posting much recently. I've hit that part of semester where I'm very much wondering at the wisdom of deciding that I want to spend a whole lot more of my life at University. I've handed in the last of my assignments, and am now in full-on exam preparation mode, and just for fun am starting work tomorrow, just when I'm busiest. Being me, all this means I'm probably worrying slightly more than is strictly necessary, and am not letting myself get side-tracked writing involved blog posts (although other distractions seem to be plentiful). I'll be finished with exams next Friday. Expect to hear a lot more from me after that.
By Lucy Valenta Posted at 10:47 AM 0 comments

I've been meaning to write something about abortion pretty much since I started this blog, but I've been apprehensive about publicly writing things that I know are likely to be even more controversial than what I usually write about. However, I recently watched this TEDx talk by Leslie Cannold, and am feeling motivated to speak out.

More details on why I am firmly pro-choice will come in a later post, but for now, this is what I need to say:

I have never had an abortion, but I could have. I have, partly through care, and partly through luck, never been in the position where I had to decide what to do with an unplanned pregnancy.

If you have had an abortion, I do not judge you. I trust that you made the best choice given your circumstances, and that's all that matters. Your reasons were good enough, because it is your life and your body. There should be no shame in your decision.

If you judge women who have had abortions badly, judge me too. I haven't had an abortion, but I could have had one, had circumstances been different, and might still, depending on future circumstance. If this information changes your opinion of me, I want you to consider this: one third of Australian women will have an abortion in their lifetimes. Many of those who have abortions are pro-life, yet, when faced with the decision themselves, find ways of justifying their need, while continuing to deny that other women feel just as justified in their abortions. If one third of women have abortions, how many more would have one, except they are lucky enough to never find themselves having an unwanted pregnancy, or a wanted pregnancy with something terribly wrong?

If you judge women who have had abortions badly, think of who you are judging, because chances are that that group of "baby killing" women includes women you love, who suffer silently, fearing how you and others would react if they knew.

I refuse to be ashamed of the fact that one day, I may need an abortion. I refuse to stand by as shame is heaped upon my fellow women for utilizing a medical procedure which, along with contraception (which is not perfect), is absolutely essential for allowing women the opportunity to participate in society on a more equal footing with men.
By Lucy Valenta Posted at 8:05 PM 0 comments


Now, I'm not a huge fan of Gillard, but I find her highly preferable to Abbott. So, when Hunter pointed me to the below video, I must admit that I watched it with glee. It is a superb attack on Abbott and his double standards on misogyny and sexism (in relation to the Peter Slipper text message affair).


Particularly brilliant was Gillard's use of quotes from Abbott from the not-too-distant past, showing exactly how (un)qualified he is to level accusations of sexism:

If it's true ... that men have more power generally speaking than women, is that a bad thing?

Yeah, I completely agree [that daughters should have as much opportunity as sons], but what if men are by physiology or temperament more adapted to exercise authority or issue command?

But now, there's an assumption that [the under-representation of women in society] is a bad thing.


My opinion of Gillard has just gone up several points, even though I think it is right that Slipper has now resigned his position.

Watch the below for a moving story of a father's journey to acceptance of his daughter's marriage to another woman, and the triumph of  love over bad ideas.


Thoughts? (Yes, I know it was produced by a travel company, it's still beautiful)
By Lucy Valenta Posted at 5:34 PM 0 comments

The State Library of Victoria is located in the heart of the city, and as I've previously written, it's a popular place for protests. On days without protests, the front lawn tends to be dotted with roughly equal numbers of pigeons, seagulls, and people, lounging around reading or chatting in groups. 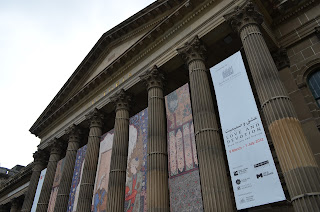 Despite the wonderful opportunities for fun outside the library however, it is the inside that is spectacular. The first time I went inside, especially inside the La Trobe Reading Room (most of the below pictures), I was awed by it, and to be honest, a little aroused. The blend of beautiful architecture and lots an lots of books gives me a feeling comparable to religious awe. If we lived closer to the city, I would definitely go there, at least occasionally, to study. 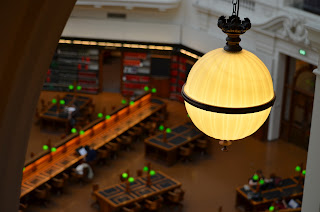 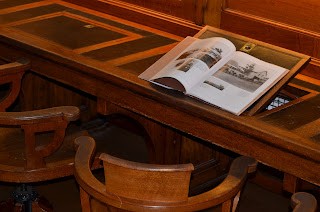 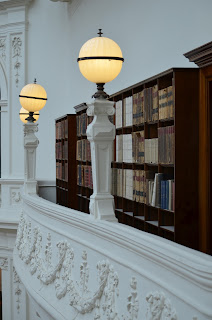 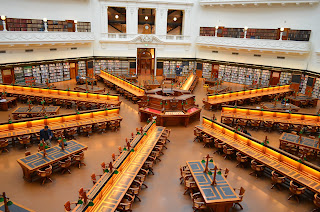 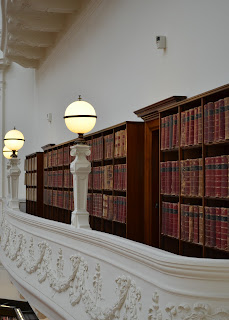 To emphasize how wonderfully nerdy the State Library is, there is a dedicated chess room, housing resources on the game of chess, and a number of chess boards set up so you can sit down to a game. 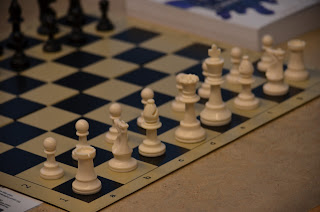 The State Library of Victoria is definitely among the top tourist destinations in Melbourne, at least for bibliophiles like me.
By Lucy Valenta Posted at 10:21 AM 0 comments